Recently I found a story I wrote for our kids. It's the story of "DandL" that I wrote long before any little noodle bearing our resemblances was in existence. Realizing that the only copy of this written story could get lost someday, I'm going to share it here. But not just for that reason.

Today marks 17 years (!!) since the day Derek asked me to be his girlfriend, clarifying that he meant to ask me to be his wife when the time was right. When I told him yes, I was saying yes to forever. I had no idea the actual weight of that "yes," although I suspected it had a good amount of it. And I'm glad I didn't know. Because traversing this crazy life together with the Holy Spirit as our ultimate guide is so much sweeter. The things I would've changed had I known ahead of time would have ruined everything. Thank You, Jesus, for Your higher ways!

Without further ado (or any editing)... 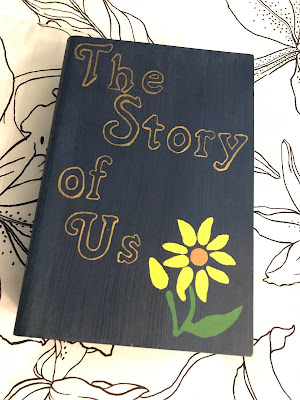 
One terrible day, the boy's parents packed up a huge truck and took the boy far away to a place called Pennsylvania. The girl was very sad.

While the boy was in the far away place called Pennsylvania, he went to a sports camp. (This boy is very good at sports.) While at this camp he talked to an adult about Jesus Christ. The adult told him that Jesus died to take away the boy's sins and if the boy gave his life to Jesus, he would get to go to Heaven someday. So the boy prayed to Jesus with the help of the adult and from that day on began to live his life for Jesus.

Meanwhile, the girl who still lived in the place called Indiana was also learning about Jesus at church and at school. One day a few years down the road, the girl also went to a camp. (This was not a sports camp. The girl is not very good at sports.) At this camp the girl learned that she was not a very good girl and that she did not deserve to go to Heaven someday. So the girl bowed her head by herself and told Jesus she was sorry and asked Him to forgive her. Jesus did forgive her and so the girl began to live her life for Jesus.

So the boy and the girl, while very far away from each other, grew up learning more and more about Jesus and loving Him more every day. They learned more about Him by reading their Bible and going to church. They talked to Him through prayer. They showed Him they love Him by helping at church and telling their friends about Him.

The boy and the girl only saw each other a couple of times over the next 15 years! But after those fifteen years, the boy was passing through the place called Indiana with his family. He and the girl were all grown up now. They were already out of high school! They talked for a little bit, and because they were old enough, they started to like each other! Sadly, the boy had to leave again for his place called Pennsylvania.

The boy could not stop thinking about the girl so he nervously picked up the phone and called the girl's dad. He asked him if he could take the girl on a date. The girl's dad liked the boy so he said yes. Then the boy picked up the phone again, even more nervous this time, and called the girl. He asked her to go on a date with him and she said yes!

So the girl drove many hours to the far away place called Pennsylvania to go on a date with the boy. She liked the boy very much. They talked about what they had been doing all those years that they were apart and learned all about how they both gave their lives to Jesus and were still living for Him.

A little while later the boy got on a place and flew way up in the sky all the way to the place called Indiana. He took the girl up to the top of a huge mountain made of sand. The boy and the girl sat down on the top of the mountain and the boy asked the girl for forever. The girl prayed and asked God if she should say yes as the boy awaited her answer. Then the girl said yes because she knew Jesus wanted them together!

So the girl packed up her things and moved all the way to the far away place called Pennsylvania. Together, the boy and the girl learned more about Jesus at school and they showed Jesus that they both loved Him by helping at church together. They grew closer to Jesus and closer to each other.

Finally, one cool spring morning, the boy and the girl went to church as usual, but this Sunday was a very special Sunday. The boy got up in front of the whole church and then went down on one knee. He asked the girl for forever, but this time he gave her a diamond ring as a promise! She said yes!

So that boy and that girl want you to know all about Jesus and how He should be your whole life. Through the Bible, He tells you everything you need to know about how to live for Him. And when you give your life to Him, He puts together your love story and so someday when you are much, much older, you can tell your children a story very much like this one.