My kids watch movies and play on the computer or iPad every single day.

We don't have TV but they have all sorts of VHS' and they watch PBS Kids on the iPad. They also play games on the iPad every day (Kempton is learning his letters and how to write them already thanks to one of his fave iPad games), and most of Jack's schooling is done on the computer! 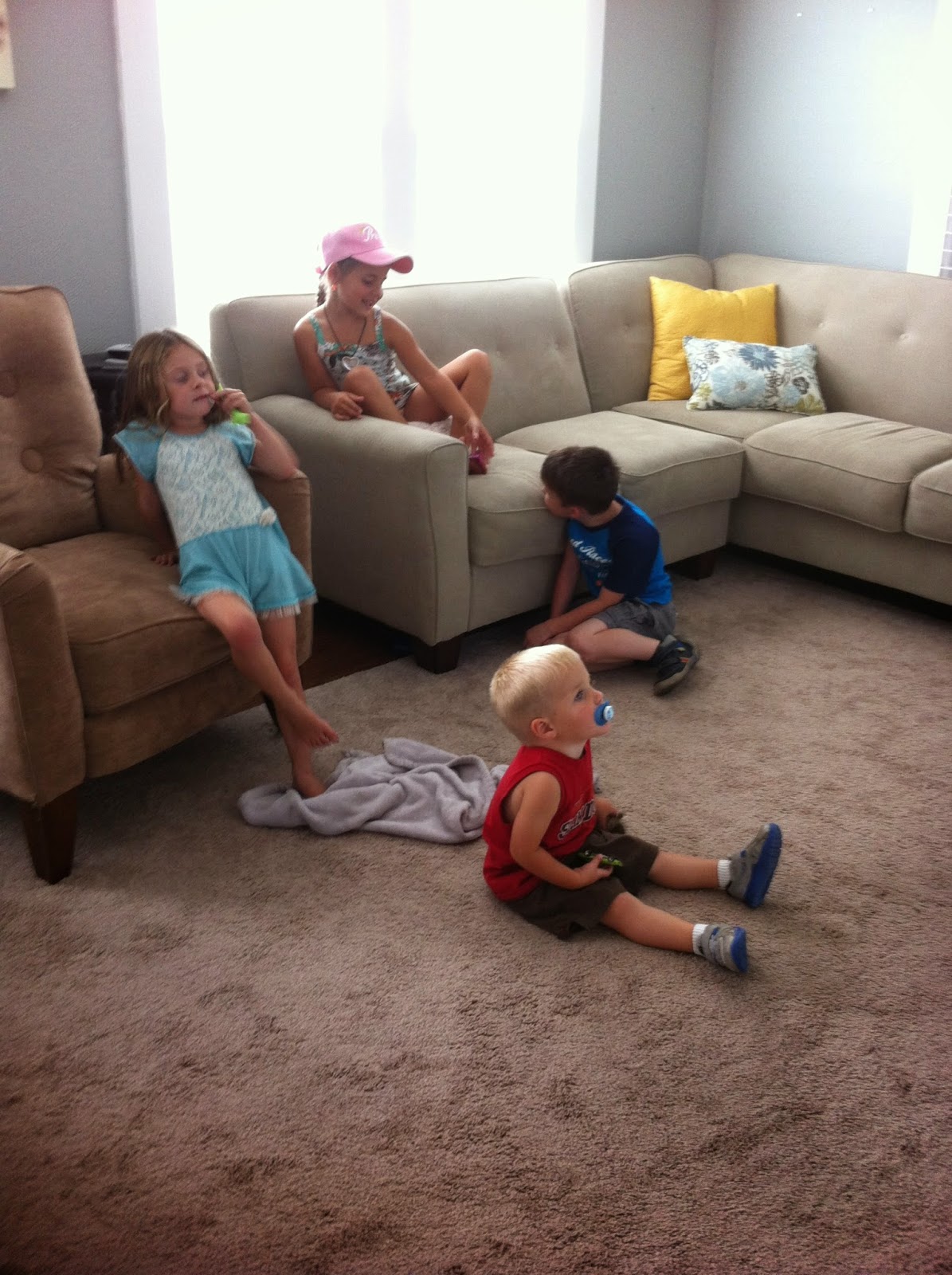 And even worse, I don't have any set rules for these things. When I feel like they're spending too much time on these things, I tell them it's time to move on and they rarely argue. They do get a little obsessed with other peoples iPads because they have different games. That gets annoying. But at home they rarely obsess over it and I am perfectly fine with letting them watch movies and play on the iPad. They've actually learned a lot through PBS Kids and iPad games. 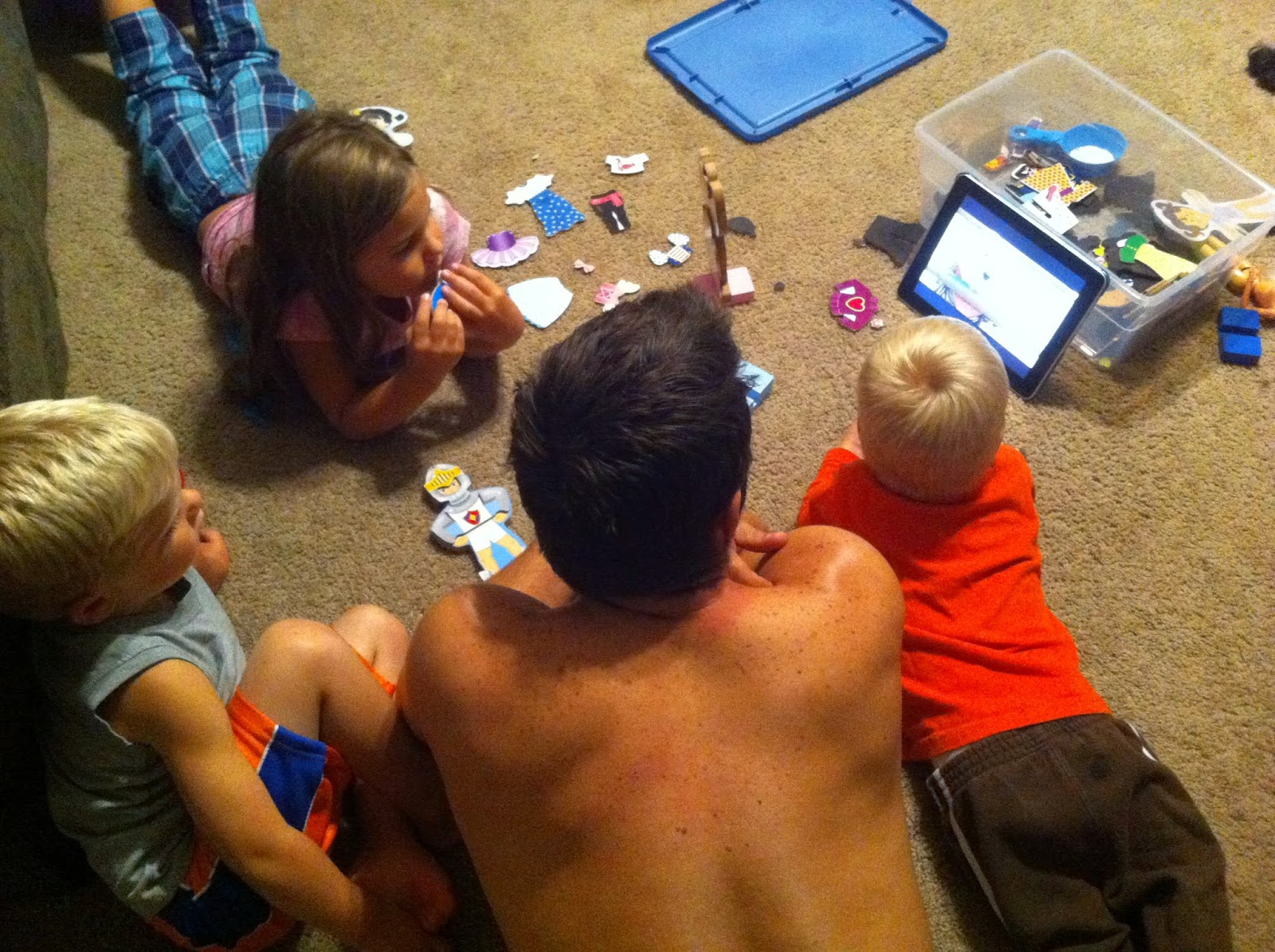 Now brace yourself... I've even used these things as a babysitter.

Doggone it, I just don't care what you think!

Maybe that's the honest part of today's post... my kids get all sorts of screen time and I don't care what you have to say about it! 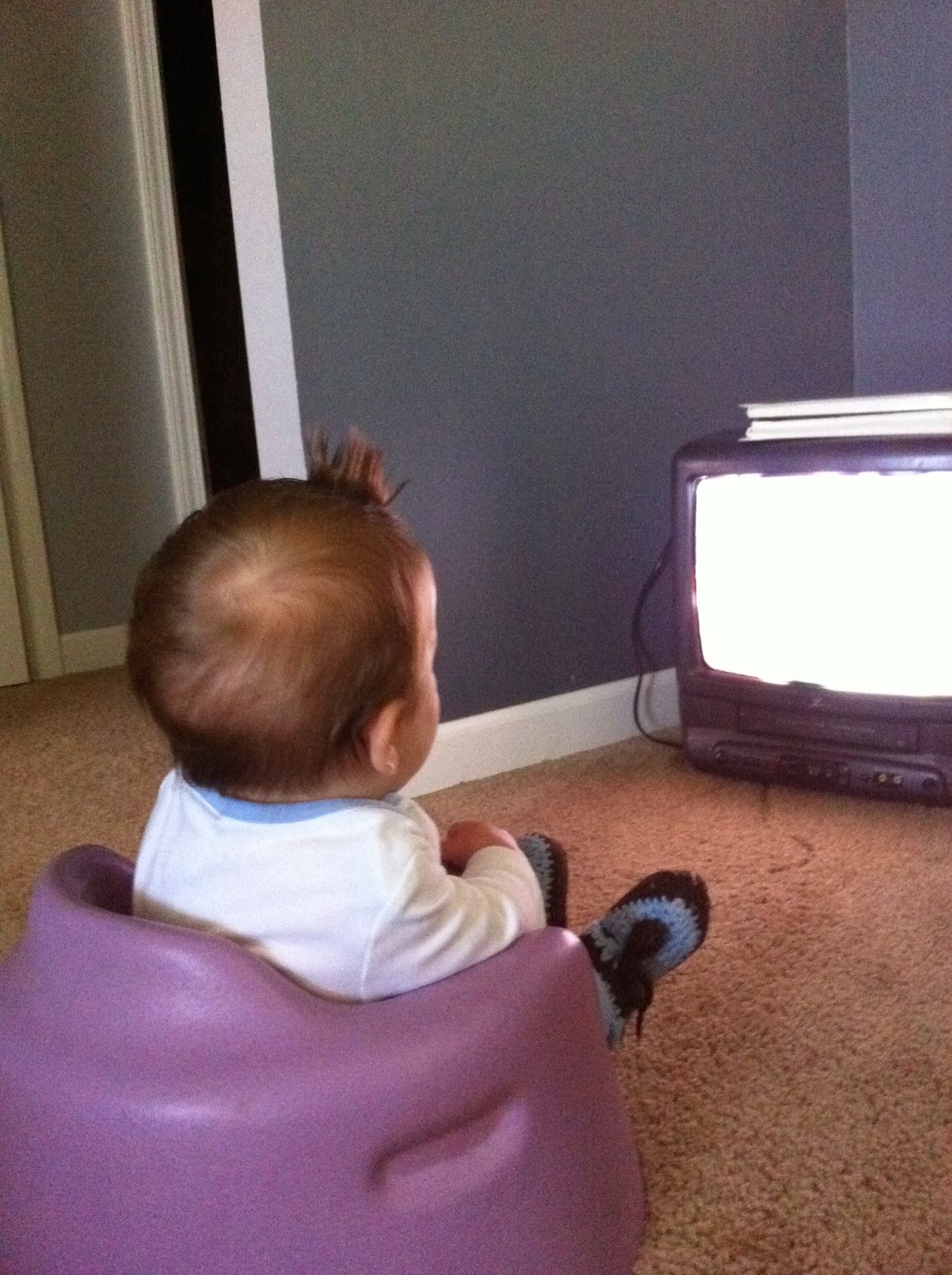 Disclaimer: Fear not, loved ones, I am not at all careless about this. I do not use movies to babysit Roger. Only Derek and Marie do that. Ha. I'm strict with what they watch and I don't let them lay around all day watching. I also have plans to establish boundaries, but for now it's working just fine how it is.
Posted by Lindsay 0 comments

I know I'm not totally alone in this because people tell me all the time that I'm not.

Does anyone else's house really get this messy? 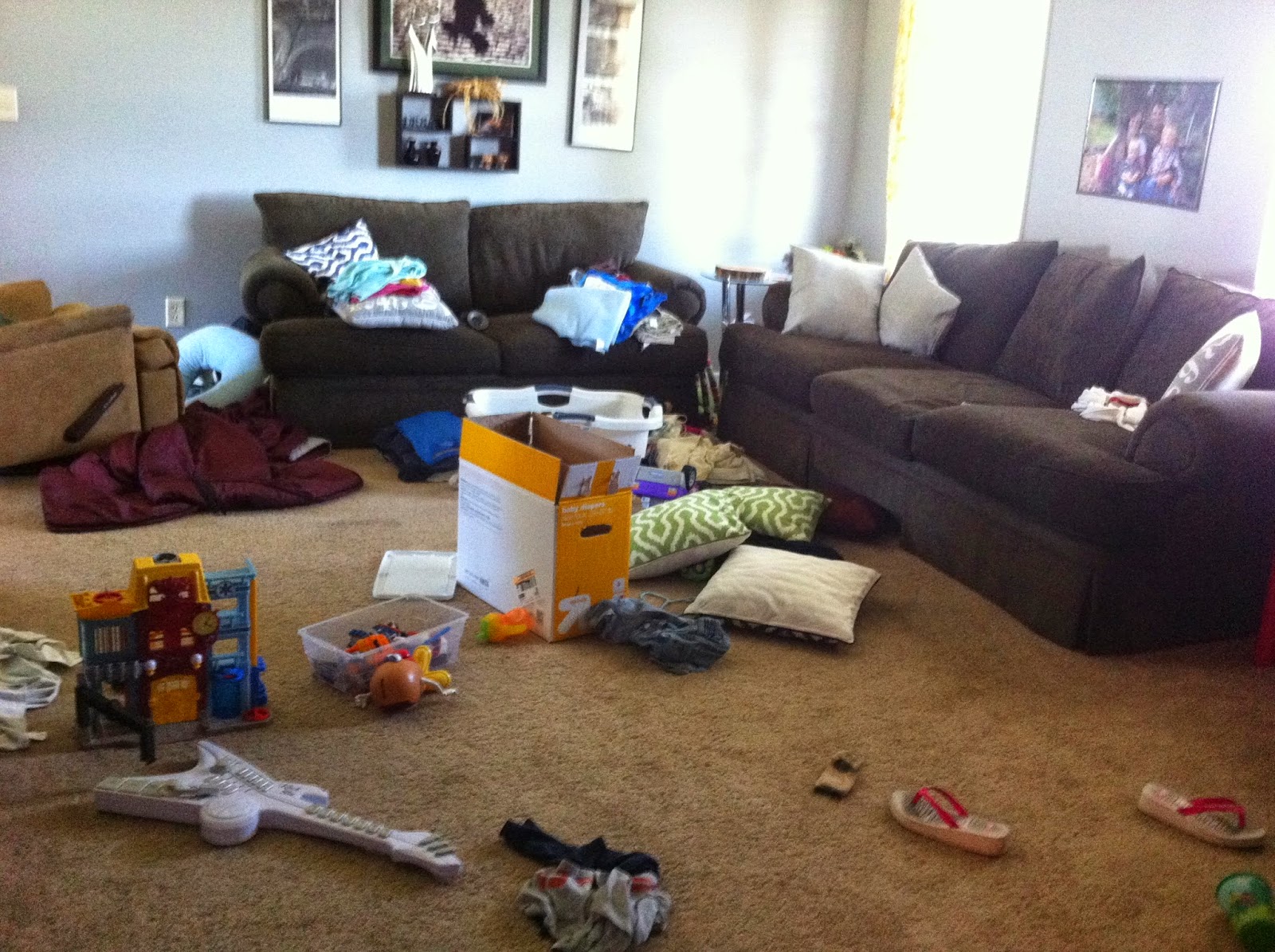 And even if it does, does it really stay that way for months at a time?

My house hasn't been clean since I got pregnant with Roger.

Not that it was ever really clean before him, it's just reached new heights of messy.

Sure, there's been a day here and there that it's gotten clean enough. We hosted Easter in April and birthdays in July. So the house was clean for a minute then. And it took me a week at least of several meltdowns to prepare the house for those occasions.

The master bedroom is the messiest room in the house. 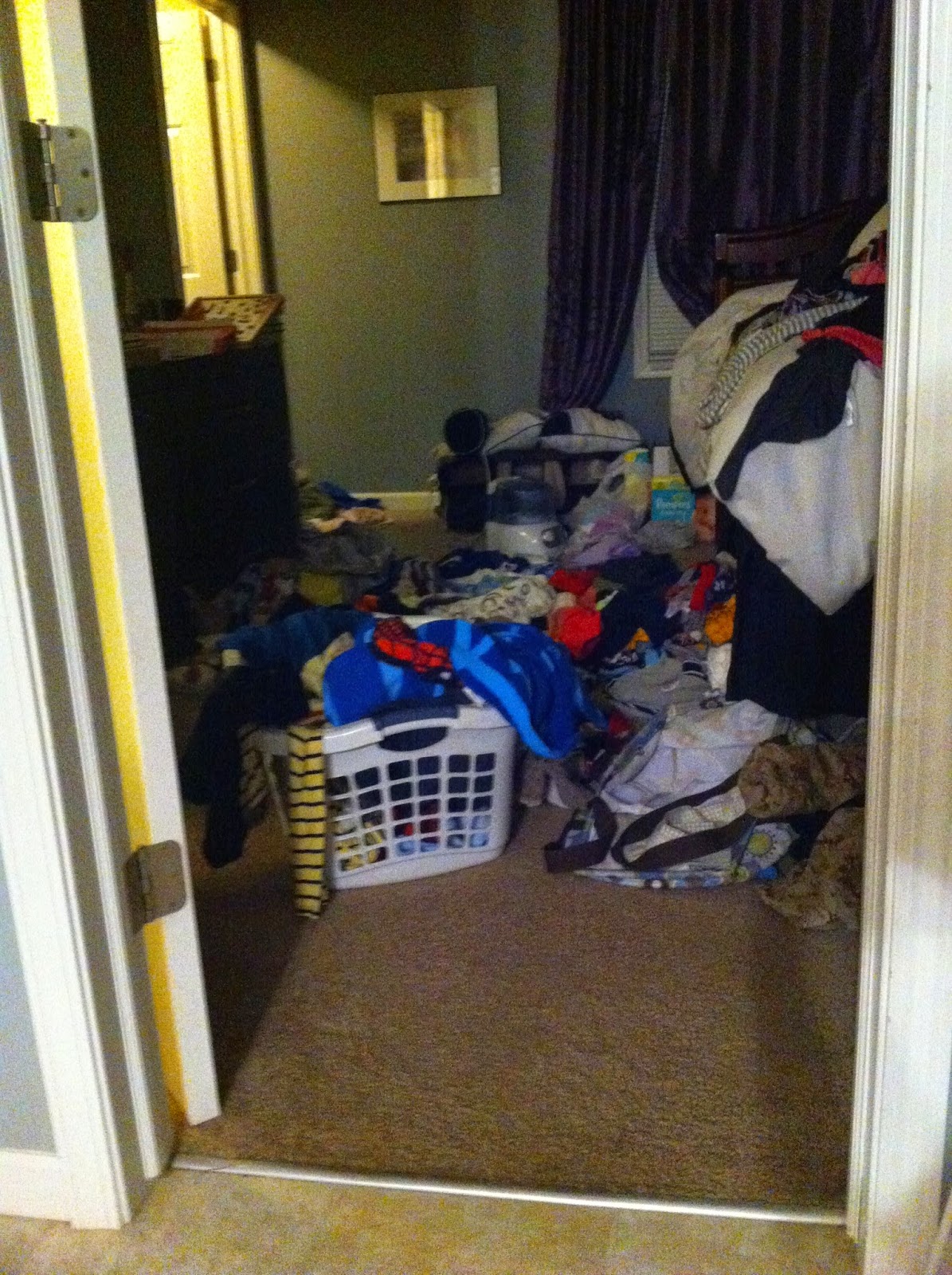 Very recently the house was such a mess that you could not take more than one step without having to step over something… throughout the entire house.

My kitchen looks like this probably 4 times a week. 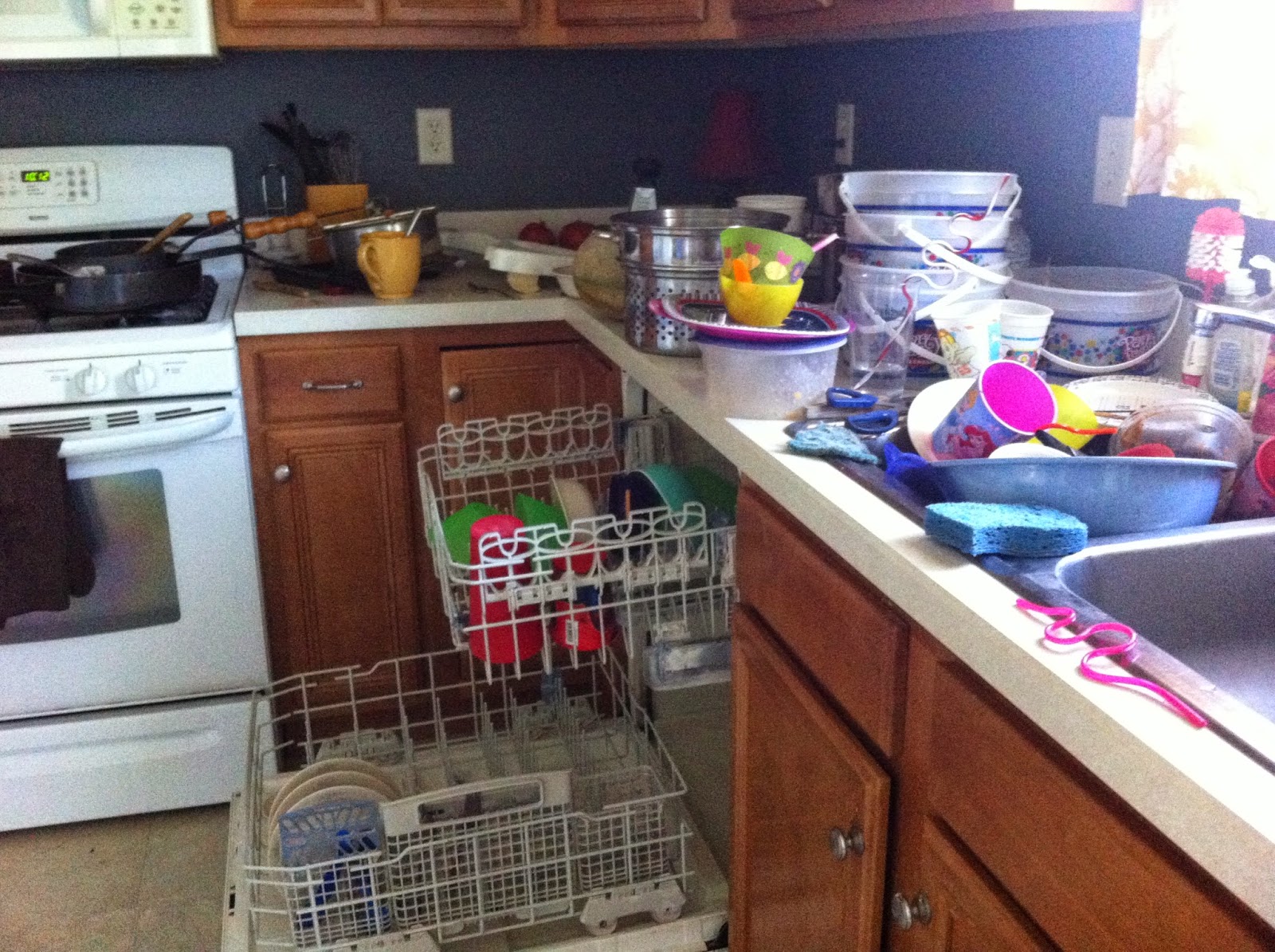 I'm wiping noses and butts. Feeding, disciplining, listening to endless chatter. These are very important things, I know. And I truly love every part of my calling. But I'm not even sort of the Pinterest mom who sits and plays tea party every day and puts on costumes and productions in the living room. Maybe on rare occasions, but mostly…

And not ruin my children's childhood in the process.

I'm sure I'll get the hang of things eventually and it won't be quite so disgusting around here. But in the meantime I'm going to embrace the wisdom my mom passed along to me from her dear friend, Vicki: This is just a phase. It won't always be this way. And I don't want to waste away this phase by concerning myself (too much) with things that will not alter the course of eternity.

I have learned that sometimes I just need to let it go (that song is literally playing in Marie's room at this moment) because refusing my sis-in-law's company at a moments notice because of a messy house is sad and something I simply don't want to do. And I'm super thankful for friends and family who love me in the midst of the mess!

My life has been a little bit chaotic since Roger was born. We are so busy, and I have a two-year-old who hits and screams and throws all out tantrums at the drop of a hat (sometimes literally!) I'm tired. I'm irritable. Sometimes I cry...

I didn't have the sound on so I had no idea how the mom was responding, but I could tell she was responding significantly better than I would have because the kids aren't crying or flinching. They don't look afraid of Psycho Mommy.

At first I laughed out loud, then I started to get teary. I know I would turn into Psycho Mommy because there have been three separate incidents where seriously huge and hard to clean messes were made (one involved pencil and white wall, another involved markers and Marie's entire room, and the last involved baby powder and Jack's entire room), and I lost it.

So I'm watching this honestly pretty hilarious situation and thinking, wow, I want to be that mom who takes a deep breath, gets down in the flour, and starts drawing pictures in it with her babes. Sure, we'd discuss how it was not a good idea to make such a mess, and they would most definitely have to help clean it up.

But first, we'd enjoy life together. First, we'd make the most of the situation. First, we'd make memories. Not the kind of memories I have when I see a bottle of baby powder. I can see their crushed spirits on their sweet, scared faces. No, I want to make the kind of memories that make us giggle together years later, that make me completely forget the process of cleaning it all up because the playing in it was so worth it. 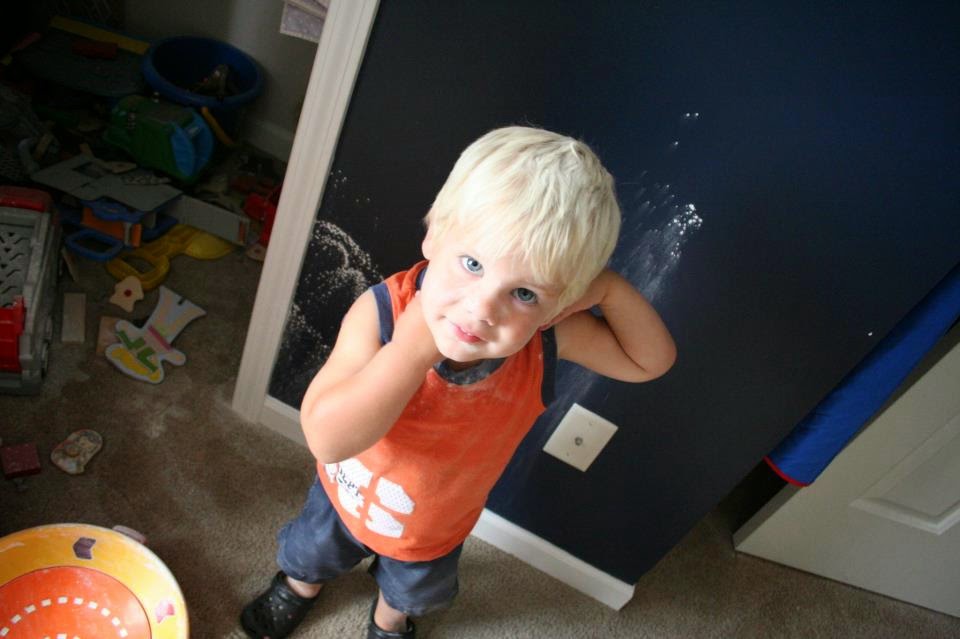 My prayer is to lose the Psycho and put on the Loving, Patient, Enduring, Memory-Making Mommy.

This is Day 1 of my 7 Days of Honesty. This is my life. Real, messy, crazy, sometimes ugly life. I'm gonna spend the next 7 days sharing my real life and finding the joy in it. Anyone else brave crazy enough to join me?

Oh how He loves

The past couple of years... er... days have been rough with Kempton. He's always been the difficult one, but it rarely got to me because he really is so stinkin' sweet and snuggly. 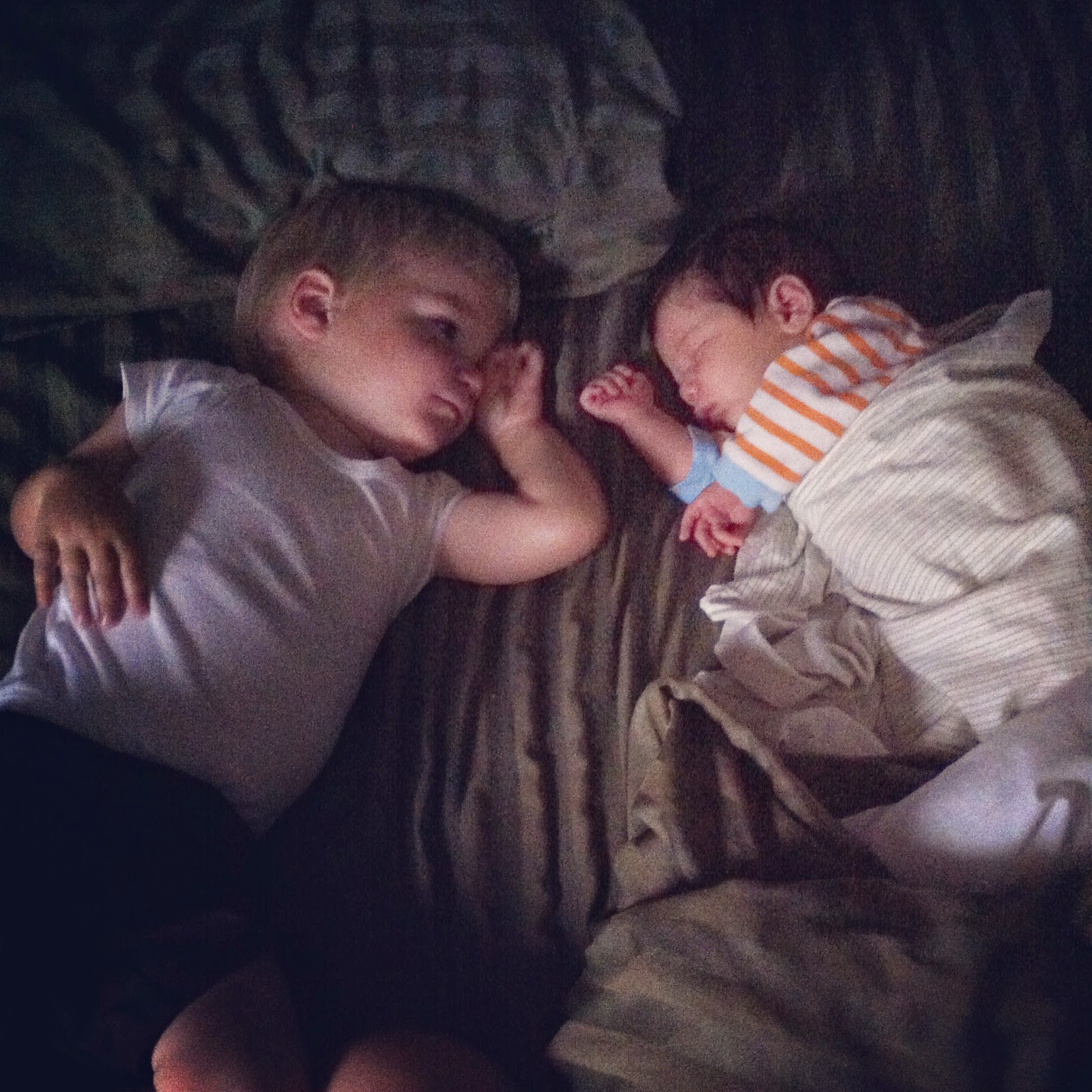 But something about ruined nap times...

I get SO ANGRY. 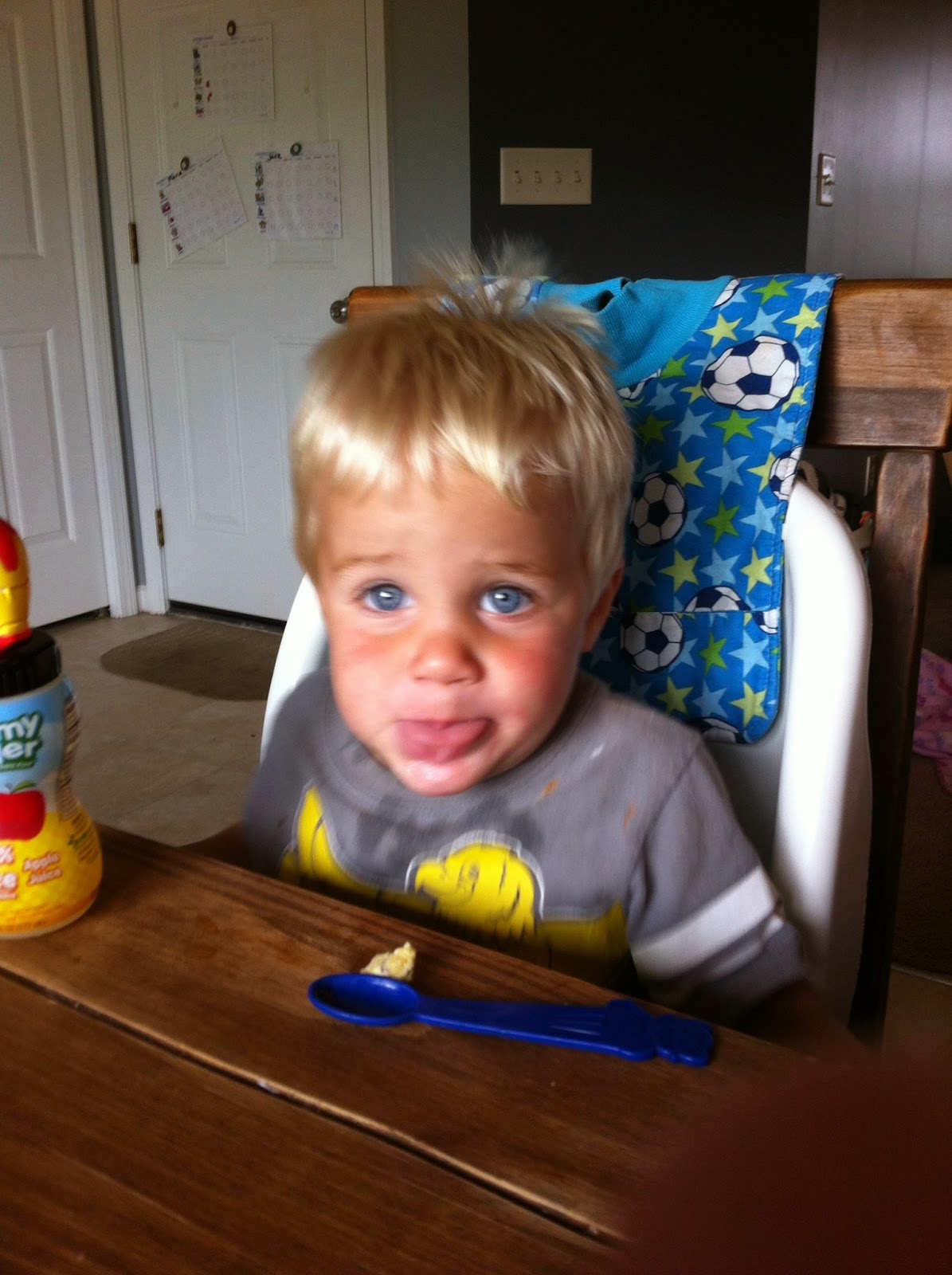 So many regrets this week, but God did a little humbling today. Roles switched around and suddenly I'm in Kempton's shoes, and God is in mine. 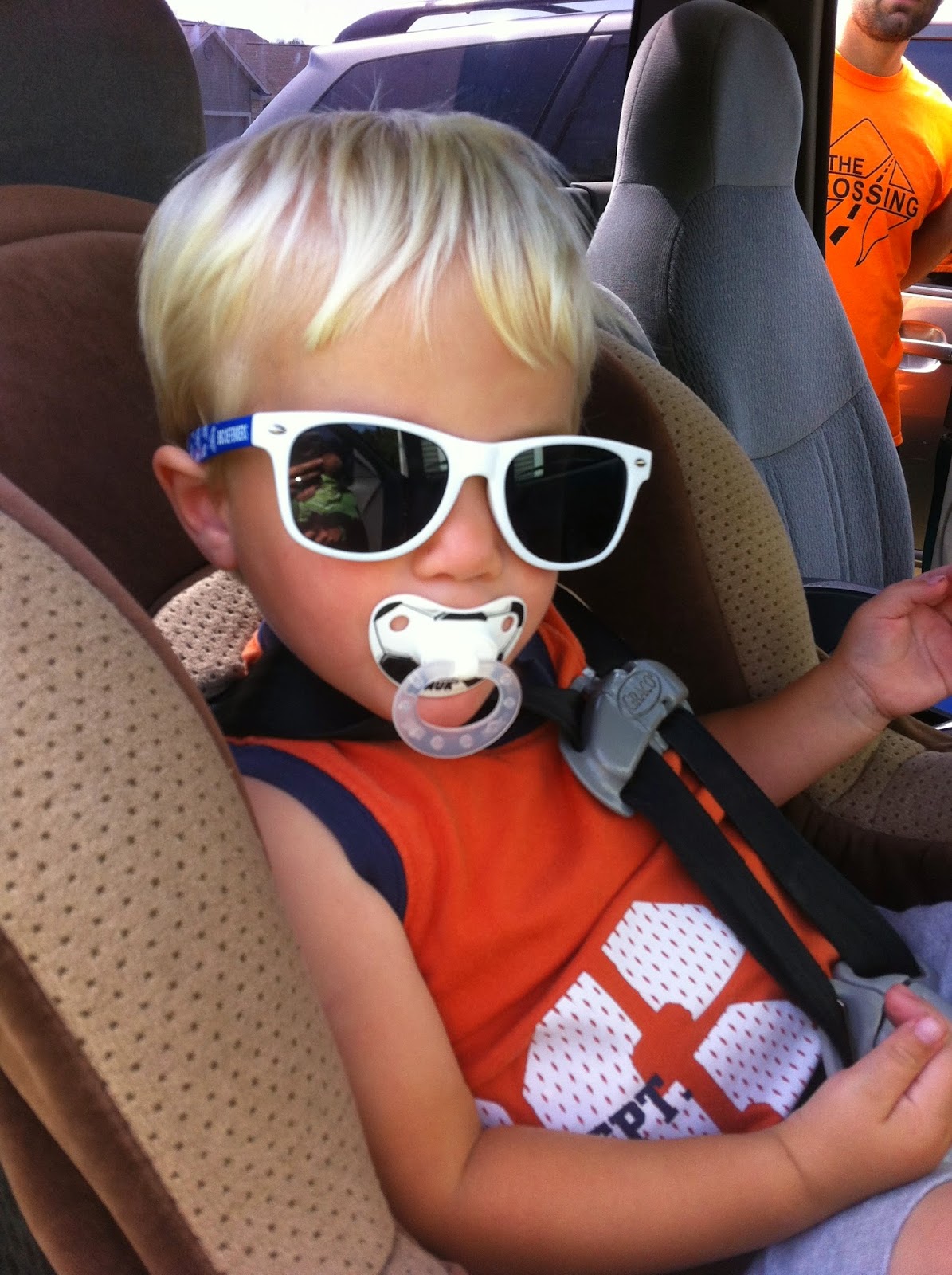 But here's the huge difference: God always loves me, always lavishes grace, always shows mercy, to an extent I cannot even fathom. 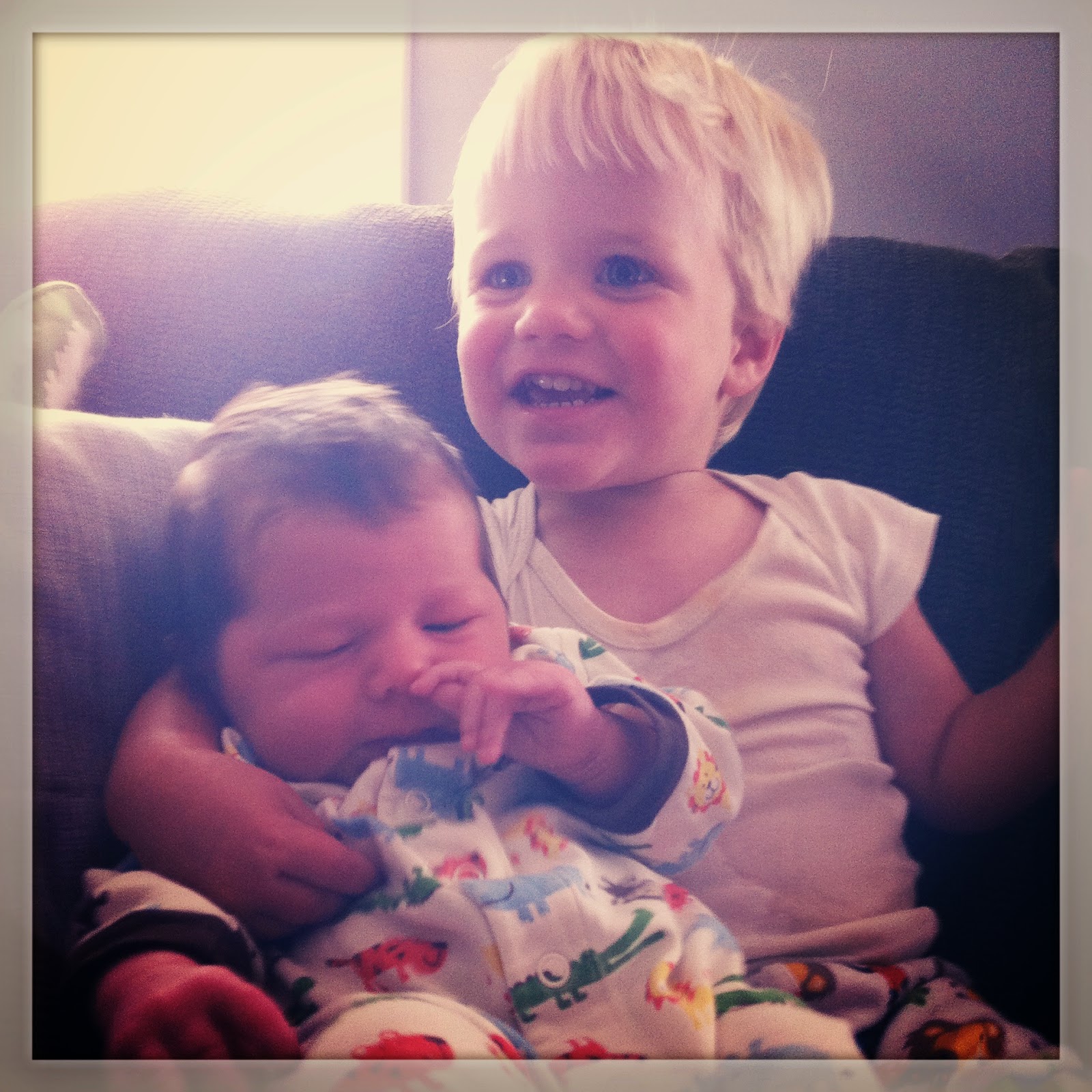 This kid, who can barely keep his eyes open all morning, cannot obey the simple rule of staying in bed during nap time. He really wants to sleep. His body longs to sleep. But his sinful nature is just too overwhelming. 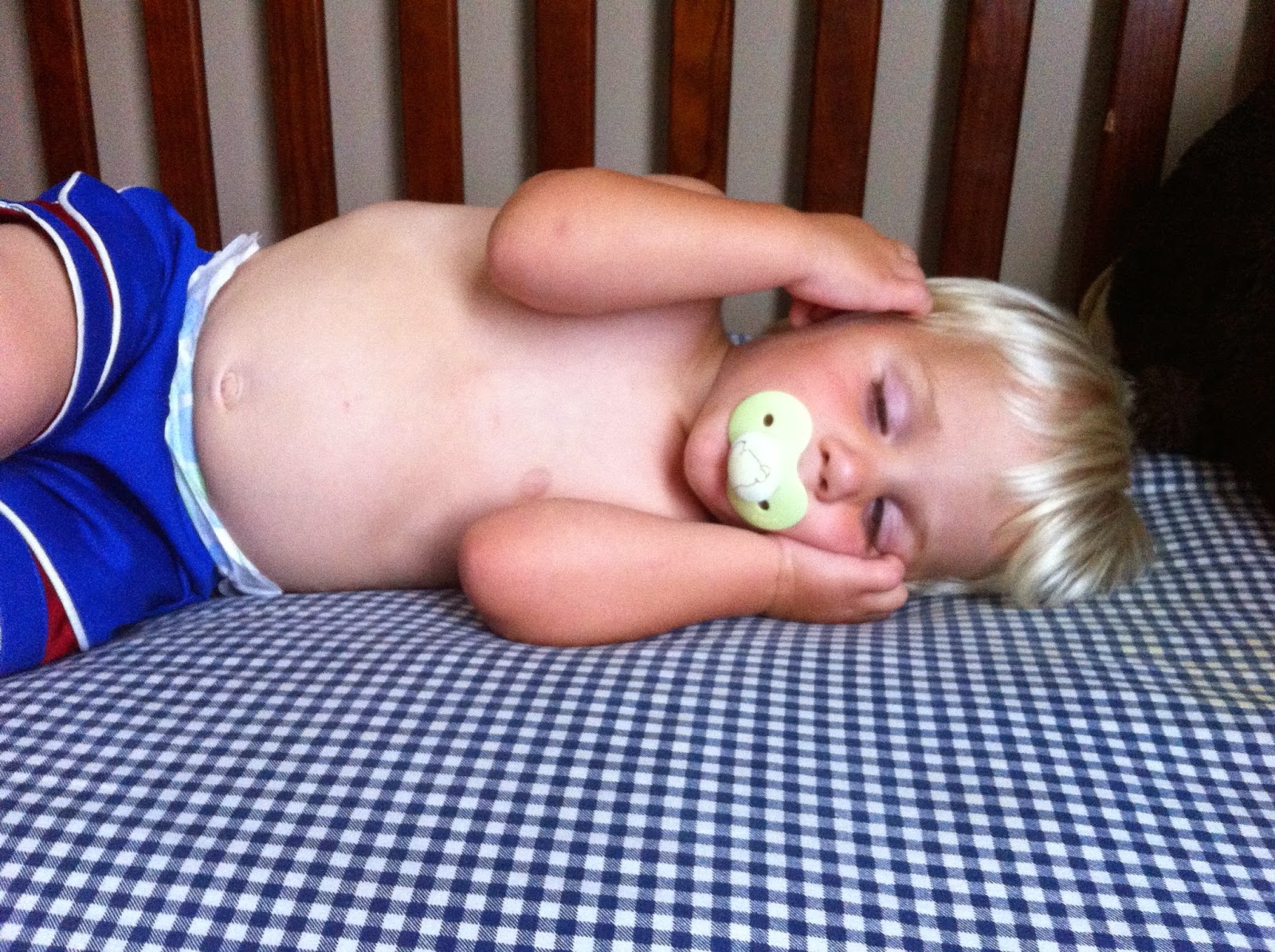 How many times do I let my sinful nature win out in a single day? And yet I haven't heard God scream empty words at me. I haven't seen Him throw His hands up in defeat and storm away.

Oh, how He loves me. 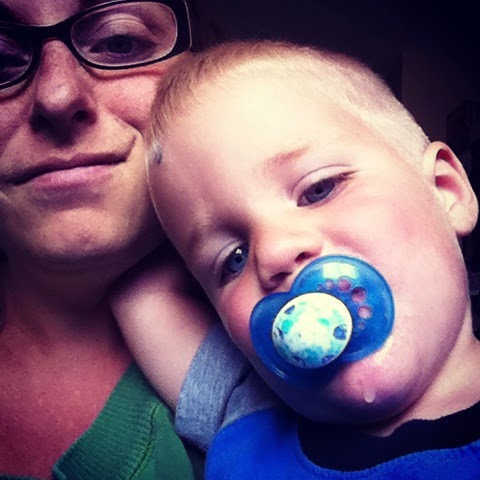 And this baby boy. 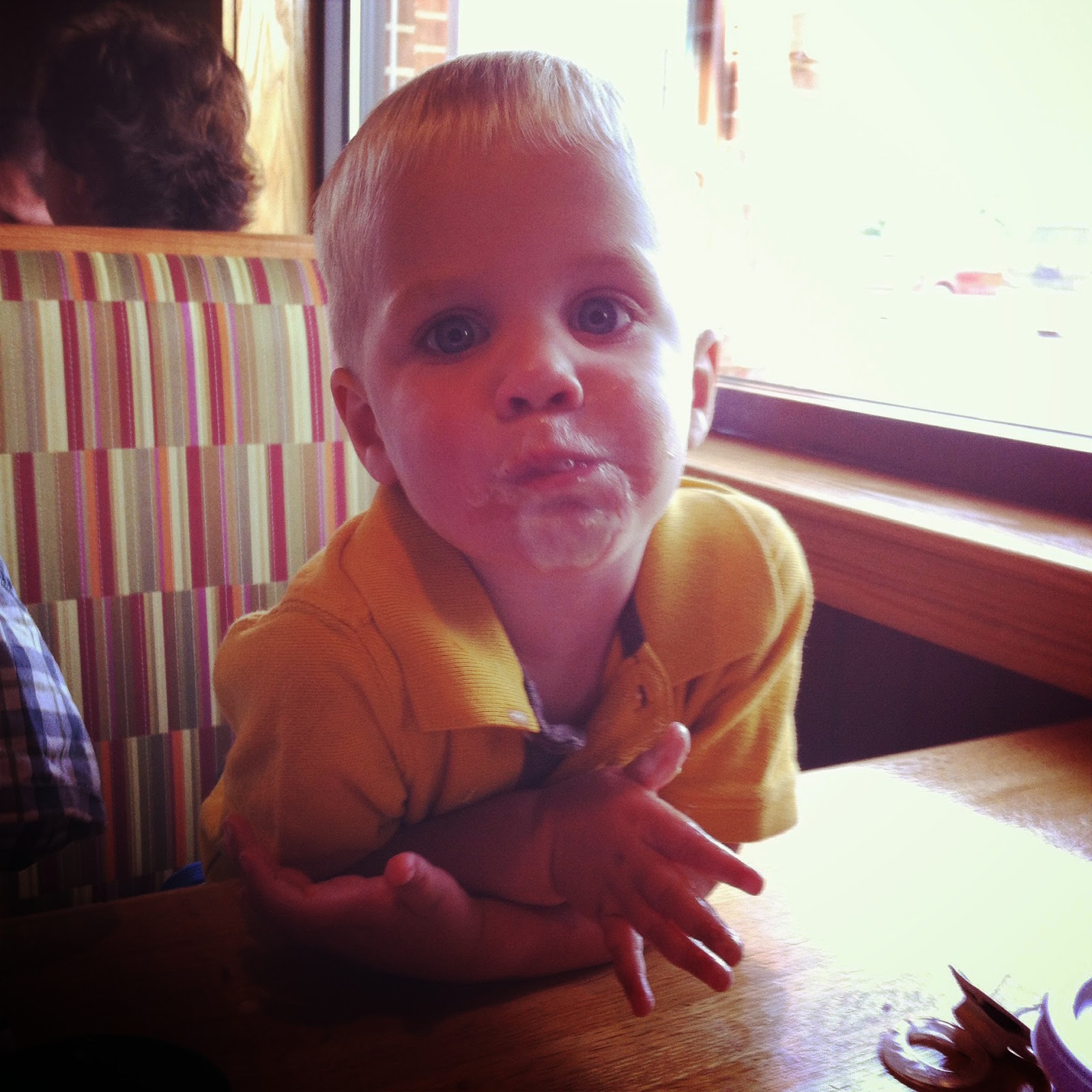 I love you, Sweet Shmemp. Always and forever, no matter what. 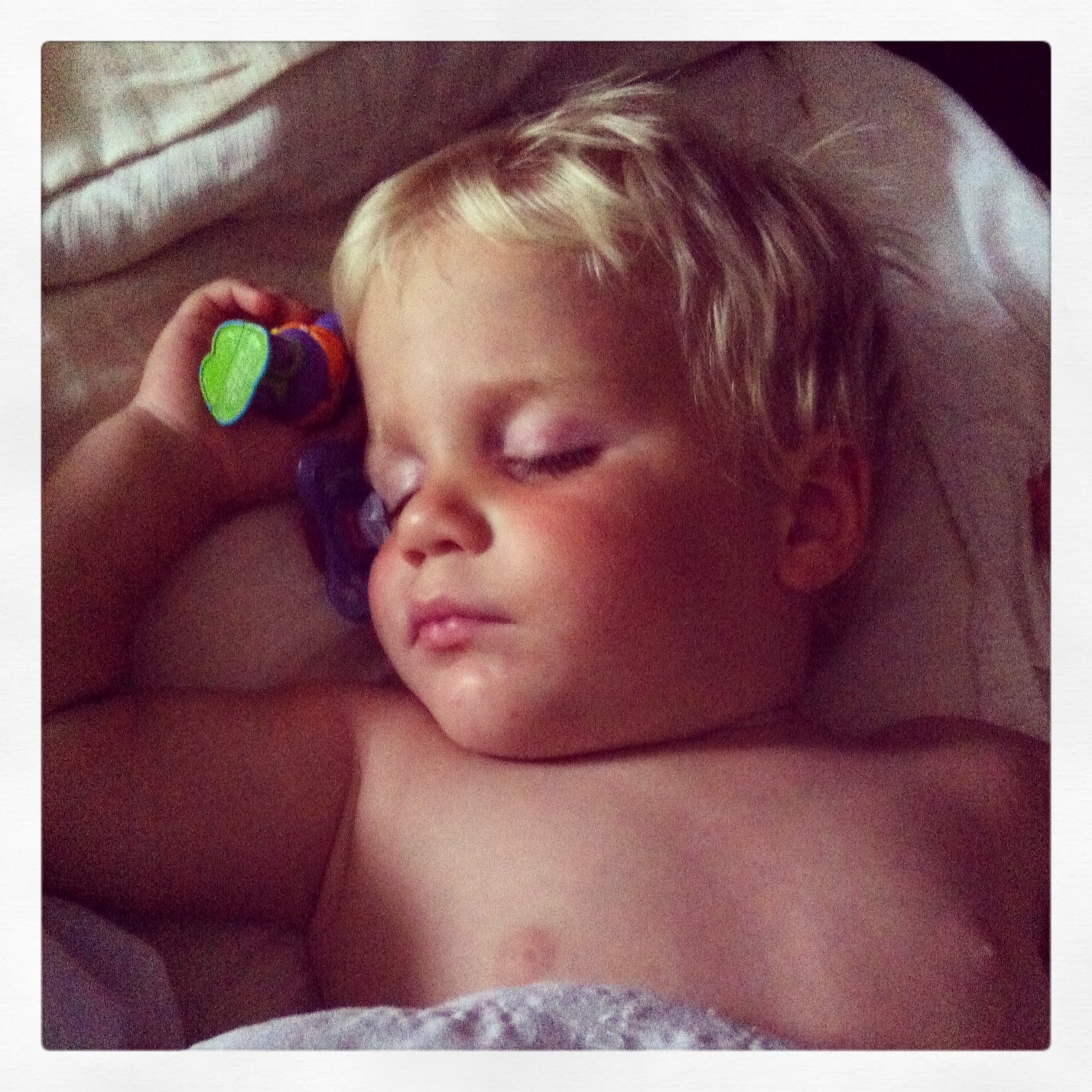 For I am sure that neither death nor life, nor angels nor rulers, nor things present nor things to come, nor powers, nor height nor depth, nor anything else in all creation, will be able to separate us from the love of God in Christ Jesus our Lord. Romans 8:38-39