I am not a big-project kinda girl. I need simplicity. That is how God made me so I accept it. But I do love teaching my kids using themes and celebrations! (See our Dr. Seuss celebration).

So to commemorate our 100th day of learning here at our house, I found these ideas while the kids were busy doing their math...

-The worksheets from HERE are awesome!

-Using the Math-U-See blocks, we found different ways to make 100. 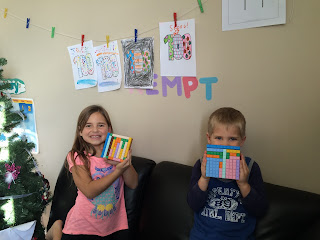 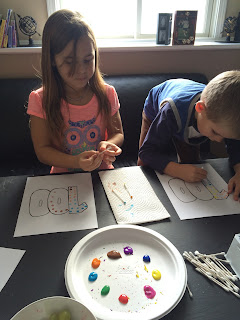 -We practiced with money by making 100cents/1dollar. 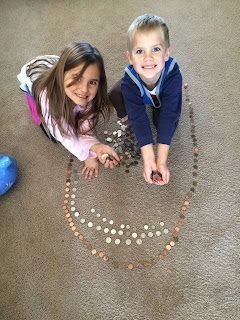 -And last, but certainly not least, we read a book of course! I happened across one at the library the other day.

Hope this is helpful for someone! Especially someone like me who needs simplicity paired with very last minute planning!

((THANK YOU to the wonderful mommas/teachers for some of these fantastic, simple ideas!))

My Daughter's Story - a mommy's perspective

It was January of 2015. Time to Revive was in town and Derek was ALL in. He'll tell you that he doesn't know why exactly except that he didn't want to miss out on what felt like something HUGE.

And he was right. It was HUGE.

The hugest part for us started during the prayer week of ReviveINDIANA.

Marie was having a massive angry tantrum. She had been sent to her room to finish it out there. But she just wasn't calming down. It was very unsettling.

Derek finally went in and climbed into bed with her. And started praying.

I wasn't in there. I didn't hear his prayer. I was busy distracting myself from her screams. But the tantrum finally subsided.

A few days later at breakfast, I was reading the Bible per our usual routine. Marie interrupted and declared,

"I believe in Jesus!"

I'll be honest, I didn't think much of it. She had always claimed to believe.

Every day of my kids' lives I have prayed for their salvation. My prayers for Marie were becoming more and more... well, desperate. There was a growing urgency.

But after this particular morning when she "confessed with her mouth that Jesus is Lord," (Romans 10:9) the sense of urgency disappeared.

In October we were reading her devotions together:


Whoever believes and is baptized will be saved. Mark 16:16

She stopped and said,

"Mom, I need to get bathtized." 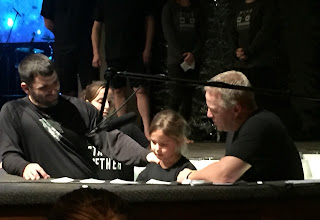 I'll be honest, I didn't think much of it.

But she wouldn't let it go. She was excited about it! She told anyone who would listen that she was going to get bathtized. She even wrote a note to Pastor Phil in Sunday School.

I was hesitant because we had never sat down and "prayed the prayer." It bothered me that she didn't have that story that you would expect a 7 year old to have about coming to mommy and daddy and asking Jesus into her heart. But there was no denying, Jesus lives in that girl's heart. So on October 23, 2015 at the breakfast table, we "prayed the prayer" and wrote the date down in her Bible so she could have a date to refer to. But really, her name was written with blood in the Lamb's Book of Life way back in January.

On December 27, 2015, my Sweet Baby Girl was baptized (along side of me!). When asked if she thought she needed to be baptized to be saved she said, "No,

Faith of a child. Obedience of a Spirit-led Believer.


Go therefore and make disciples of all nations, baptizing them in the name of the Father and of the Son and of the Holy Spirit, teaching them to observe all that I have commanded you. And behold, I am with you always, to the end of the age. Matthew 28:19-20

Prayer for my Boys: Integrity

Integrity: Doing the right thing in a reliable way. Wholeness of character. (vocabulary.com)

Integrity is a rare trait these days.

Maybe it always has been and I'm just noticing now as a grown up and a momma. And being married to someone who has not always been a man of integrity. In fact, quite the opposite for much of our marriage.

But thanks be to God, who gives us the victory through our Lord Jesus Christ! 1 Cor. 15:57

I remember when Derek first starting talking about integrity. It was shortly after he truly repented. I was annoyed because we had said yes to something that was looking financially impossible and I just didn't really want to do. But he whipped out "integrity" and decided we were going to keep our "yes" a yes and trust God with it.

It was one of his first real acts of leadership in our family and one of the first times that I had to submit.

Thanks be to God!

Choosing to stick to our word was the right choice and God blessed it. Not just through what we did, but through Derek's stepping out in faith and leading... with integrity.

Today, my man is truly a man of integrity. He is the leader of this home. He is a man after God's own heart.

Thanks be to God!

It is my prayer that the boys God has blessed this family with will follow their daddy's lead.


Father, David was a man after Your own heart in spite of his failures because he repented and followed hard after You. I pray Jack will always do the same with integrity, godliness, and obedience (1 Kings 9:4). Help him to not grow weary in doing good (2 Thess. 3:13) but to walk worthy of Your calling with humility, gentleness, patience, and love (Eph. 4:1-2). And by doing this, may his life that glorifies You, silence the talk of foolish people (1 Peter 2:15). May he grow in wisdom and stature, and in favor with God and man as Jesus did (Luke 2:52). 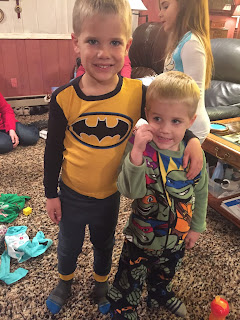 I Am Going to Die {A Daddy Draft}

I have been crucified with Christ. It is no longer I who live, but Christ who lives in me. And the life I now live in the flesh I live by faith in the Son of God, who loved me and gave himself for me. Galatians 2:20


I am going to die this year.

You heard me right, I am going to die. I've lived a happy life, but all of that is going to change. You see, God has called for an army to rise up out of First Baptist Church of Elkhart, IN and I know God is calling me to the front lines. We are marching forth to do battle against the Prince of the Power of the Air (Ephesians 2:2). I am laying my life down and I will die to myself so that I can be used by God to further His kingdom for the glory of His name.


Truly, truly, I say to you, unless a grain of wheat falls into the earth and dies, it remains alone; but if it dies, it bears much fruit. John 12:24

Our church's mission this year is to be used by God to save the whole world.

"Foolishness" many will say. "Impossible" still others will scoff. "Unrealistic" believers will tell us. That's just the beginning of this battle. You see, those are all lies from the one whom we're fighting. Our Commander and Chief has told us, “Now all glory to God, who is able, through his mighty power at work within us, to accomplish infinitely more than we might ask or think. Glory to him in the church and in Christ Jesus through all generations forever and ever! Amen.” (Ephesians 3:20-21 NLT)

I can hear you believers out there:
[Chuckle]
[Giggle]
[Snicker]
"Yes, God can do that, but He's not actually going to do that."
"I've never seen God do anything like that before."
"You're aiming too high, you'll never achieve that goal."

That's right, I'm well aware of the fact that those who truly lay down their lives for the cause of Christ suffer dearly. I've watched my pastor endure the tragic death of his daughter only a couple of months ago. I've seen him raise his hands in praise and lose his breath from giving all he has to worship our Commander and Chief. I've seen him press on toward the prize, knowing full well that this life is but a whisper. We are strangers in a foreign land battling against a Dark Prince who is holding this world captive from joy and peace. I will not fear this world. I will not run from the calling upon my life. I will be strong and courageous knowing full well that my treasure is laid up in heaven where no moth or rust can destroy it (Matthew 6:20).

We are an army that is rising up to fight for the lost and dying souls of this world. We are training our bodies and making them slaves to the will of our Commander and Chief. We are giving up everything that this world has to offer so that we can gain an eternal reward.

I realize that most will not get this far in my post here. But if you're still reading, if you can feel our Commander and Chief tugging on your heart to join in this battle, we must begin to pray. The only way to win this battle is on our knees. Will you commit to pray? If you can, I want to invite you to join me at First Baptist Church on Thursday mornings at 7:00am. Dress warm, I don't have keys to get inside. We need to begin crying out to God to use us for the glory of His name. So that at the name of Jesus, every knee will bow (Philippians 2:10).

Won't you come and die with me this year? Forget about yourself so that you can experience all that God has in store for this year. 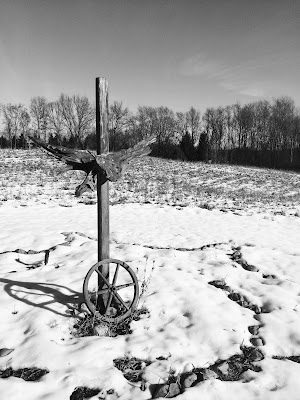 "If any of you wants to be My follower, you must turn from your selfish ways, take up your cross daily, and follow Me." Luke 9:23

Prayers for My Boys: Salvation

Welcome to the New Year!

2015 was my "year of prayer." While 2016 may have another main focus, I'm excited to see how God continues to grow me in the area of prayer!

So I will continue to share prayers the Lord has put on my heart for my kids. 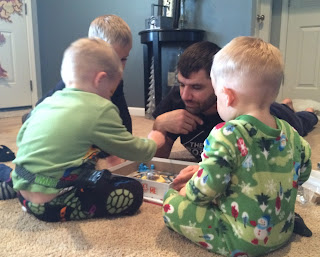 Jack is 5, Kempton is 3, and Roger is 1. None of them have come to the saving knowledge of Jesus yet. In light of that, this prayer is the most important right now.


Lord, save Jack's soul. Please adopt him into Your family as Your son (Ephesians 1:5; Romans 8:15). Call him with Your Spirit and lead him to embrace Your truth. Direct his heart to Your love and steadfastness (2 Thessalonians 3:5). And may he fully grasp and tap into the incredible power You used to wash away his sins and raise Jesus from the dead (Ephesians 1:9). Thank You for what You will do in my boy's life!


There is nothing my heart desires more than to see all of my babes come to know their Savior. This is my daily prayer. I am being challenged in The Circle Maker by Mark Batterson to never give up.

In John 11, we read about how Lazarus died 4 days before Jesus showed up. We know the story. We know that Jesus raised Lazarus from the dead for the purpose of glorifying the Father. But imagine how everyone at the time was feeling. Imagine the frustration, the anger when Jesus didn't come right away. But as Mark Batterson pointed out in his book, Martha refused to give up...


"Lord, if you had been here, my brother would not have died. But even now I know that whatever you ask from God, God will give you."

Lazarus was 4 days dead and Martha still refused to give up.

What prayer have you given up on? Get back to it, my friend!