It will be 20 years this summer since God opened my eyes to my sin, forgave me, and sealed me forever with His Spirit.

It's been 31 years that I have attended church.

While the story of Elijah is not as commonly told as, say, Moses and the burning bush or Noah's Ark or the birth of Jesus, it's still one I've heard many times.

And yet somehow, after all these years, I've still learned something from it that is literally transforming my relationship with the Lord.

Please, let it do the same for you!

In 1 Kings 19 we read about a very discouraged Elijah. Up to this point, he has been incredibly faithful and performed some insanely miraculous stuff. But now he's running for his life and convinced that all he's done has not accomplished a blessed thing. He's sure that he's the only one left of God's people.

After taking care of Elijah for a time, God tells him to stand on a mountain.

Behold, the Lord was passing by!

A great and strong wind was rending the mountains and breaking in pieces the rocks before the Lord...

The wind was literally strong enough to start breaking the mountain into bits! Talk about LOUD. And scary!

but the Lord was not in the wind.

That was a pretty awesome display there, God. If it were me, I'd totally be in the wind!

a voice of gentle silence.

Elijah knew immediately that God was in that audible silence.

At a prayer retreat this past weekend, our teacher said this of His whisper: it is often just a simple thought.

Yes, God is in the wind sometimes. But usually? He's in that passing thought.

Don't let that "thought" pass by.

And now, in expectation, I listen. And I hear Him.

Based on timing, we are taking the week off from learning a new state. Instead, we are reviewing.

We have a couple of fantastic United States puzzles! Definitely worth investing in. 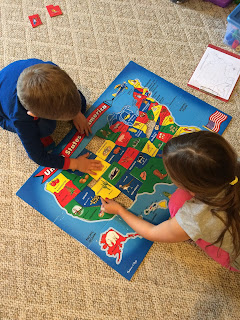 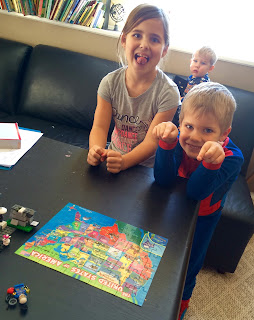 The kids worked together to put each of them together, then using a blank map of the US (googled) they wrote in as many states as they could remember that we have studied so far. 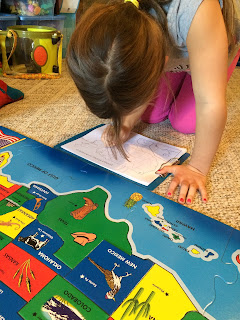 We also did a review game using simple questions.

The idea is from our Road Trip USA Geography curriculum. The review covered Connecticut and Delaware. I wrote down questions, giving each a point value based on how difficult I thought they would be. We used a large dice (I know the singular is "die" but modern English is throwing that out so here's to keeping up with the times!) to determine who went first. They chose which card they wanted. 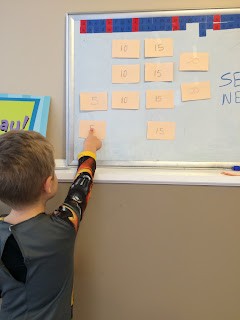 Jack was strategic and went mostly big right away. Marie went the other way and started small. Marie pulled through for the win this week! 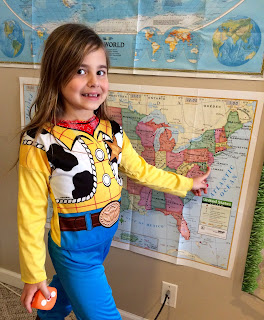 I'm not talking about tired from lack of sleep or exhausted from my crazy workout last night. I don't mean worn down from whiny kids or defeated by the dishes.

All of those things are very, very true. But I mean something so much deeper.

I cried out to God in the middle of doing the dishes - "I don't want to!" (He's used to such outbursts). I'm just so tired of fighting my sinful nature. I'm exhausted from the constant battle. I'm worn down from the regular failure. I feel...

I quit doing the dishes (this did not take much convincing on God's part!) and sought relief in my War Room - a sacred place I have not been spending nearly enough time in I'll admit.

The Lord responded to me with the verses my sisters, mom, and I are currently memorizing:


He gives power to the faint, and to him who has no might He increases strength. Even youths shall faint and be weary, and young men shall fall exhausted; but they who wait for the Lord shall renew their strength; they shall mount up with wings like eagles; they shall run and not be weary; they shall walk and not faint. Isaiah 40:28-31

What on earth does it mean to "wait for the Lord"? What does it look like in my every day?

In His way, He led me to an excerpt from Andrew Murray's book Waiting on God:


Above everything, when you wait on God, you must do so in the spirit of hope. God in His glory, His power, and His love longs to bless you… God's delight is to impart Himself to His children. However weak you feel, wait in His presence. As the sun does its work on the weak who seek its rays, God will do His work in you. Trust Him!

What does waiting on God look like in my every day?

Jesus IS doing something new in me (even when I don't feel it)!
I will run and not grow weary!
I will find streams in this desert!

I am NOT defeated!

Because greater is HE who loves me.


For I am about to do something new. See, I have already begun! Do you not see it? I will make a pathway through the wilderness. I will create rivers in the dry wasteland. Isaiah 43:19 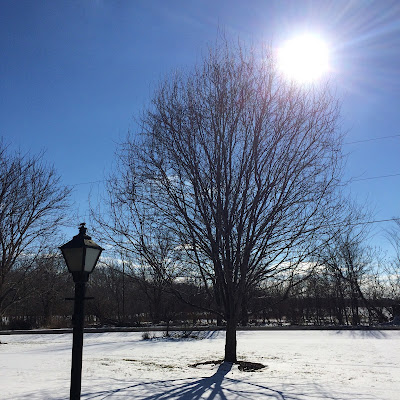 Are you feeling defeated today? Soak up His Word like rays of sunshine! And let me know how I can pray for you!

We have been studying our way through the United States this school year. I'm pretty sure the kids like it. But I'll be honest - I love it!! I'm a proud American and have always dreamt of traveling to every state. I'm enjoying doing just that with my babes, using the internet and Confessions of a Homeschooler's Roadtrip USA curriculum!

Okay, not exactly the same as being there, but definitely more than nothing. I love this country!

I thought since I have gotten so much help from fellow homeschool mommas and generous teachers, I would offer up some of my own help by sharing what we're doing with each state. Why not start with the very first official state, Delaware?

1. This is our favorite states-and-capitols song.

2. Each week we color the color page from COAH's curriculum and usually one other page that I find on google. This week we colored a picture of the state bird: Blue Hen Chicken. 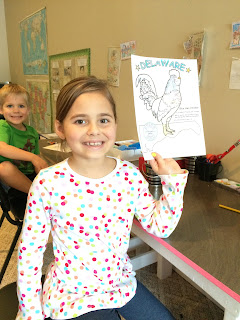 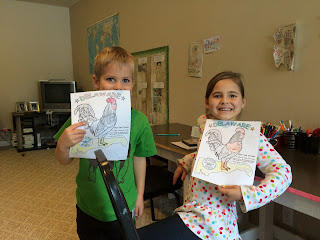 3. The kids are still very young, so instead of spending too much time on all the geographical and historical details, I pick out a handful of things I think will peak the kids' interest. Or at least mine! So we talked about the Storm of 1962 that began on Ash Wednesday (It happens to be Ash Wednesday today!) and lasted 3 solid days. We looked at photos of the aftermath HERE. I loved how this got my usually not curious child to ask questions! She has such a love for people (answer to many prayers!) and was very concerned about where the people went and what happened to all of their stuff.

4. We also discussed and looked at pictures of the Delaware Memorial Bridge that connects Delaware to New Jersey.

5. Delaware is known for its Horseshoe Crabs so we watched this cute home video of a little girl picking one up! She's much braver than me!

Don't forget to say the Pledge of Allegiance! We also review previous states we've covered and the 5 regions of the US: Northeast (what we are currently studying), Southeast, Southwest, West, and Midwest (studied last semester).

Next up: Review of Connecticut and Delaware!

Faith and Life: Fitness can be Worship {a guest post}

Fitness and nutrition are topics that most people do not enjoy talking about let alone take part in. I used to be one of those people. I do not write this as a guilt trip for you to go run a mile and feel better or to go eat a salad and call it a day.

My mindset and motivation about health and fitness changed when I realized my calling to my family is to be a faithful steward. Being healthy and fit no longer affects me; it affects my family, with which God has blessed me. If your motivation behind your health and fitness is merely “I want to look good” or “I want to be skinny”, then your consistency in reaching those goals will fall apart. When your motivation is driven by the desire to be a faithful steward of the blessings God has given to you (namely your body and family), then your motivation will be physically and spiritually beneficial and your consistency will stay intact. 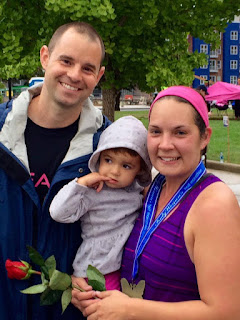 I love the phrase: “You cannot pour from an empty cup.” It is vitally important that we take care of our bodies and minds and “fill” them up so we can pour or invest ourselves into others. A healthy lifestyle is the best gift you can give your family and one of the most honoring ways to worship your Creator.

A whole other facet within fitness and healthy living is training. There is benefit to training and pushing your physical body further than you thought possible. (I Timothy 4:7-8). God has made our bodies with intricacies that even today’s doctors and scientist don’t fully understand. To use my body and mind and take care of the vessel God so amazingly designed is a way to say “Thank You” to Him. 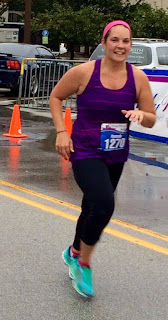 So let’s take this a little further in how this can impact our relationships. While we can train our bodies and make healthy nutritional choices and focus on stewarding our own bodies wisely, it’s a lot more enjoyable with a friend! Sharing fitness and nutrition with others, and more importantly the motivation behind my fitness and nutrition, becomes yet another act of stewardship. Some of my closest relationships have been built through fitness and accountability, accountability within fitness and my spiritual life. Learning to become vulnerable and accountable to others in fitness and in spiritual matters has been one of the biggest blessings in learning how to be a good steward.


In conclusion, it is important to realize that being a faithful steward is not only reserved for finances and material possessions. God has blessed me with a physical body that I am “stewarding” for Him. My calling and responsibility is to take care of it and make wise choices in an effort to be healthy. When I make wise choices to “fill” my cup up, pouring into others’ lives is much more effective. I definitely am not 100% consistent in the area of nutrition and fitness, but I do make decisions daily to work toward the goal of living a healthy life and being a positive example for my family as an act of worship to God. When Biblical stewardship is your motivation behind why you desire to be fit and make healthy nutritional choices, then it absolutely becomes awesome worship of an incredible God. 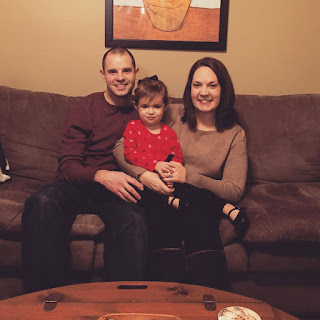 ((Hannah Cartledge is a wife and a momma to a sweet baby girl. She is also a BeachBody Coach with a passion for fitness as a ministry. Find her at www.beachbodycoach.com/hcartledge)).

Interested in a free sample of Shakeology through Hannah? The first 10 readers to contact her via her website, on Facebook, or through email (Cartledge_Hannah@yahoo.com) can get one! Just let her know I sent ya ;)