Yesterday I shared this fun video full of giggles and happy faces. It was definitely the highlight of the day.


Because yesterday was rough. Ugly. And as I thought about that post I felt convicted.. like I was straight out lying to the world wide web about life here at the Jacobs' home.

I don't believe in airing out dirty laundry on social media. TimeHop has done an excellent job of reminding me of those times I've done that years ago, embarrassing me to no end. Thankfully it was years ago and I have no intention of starting that back up.

What I enjoy seeing in my social media memories is shots of my now 4 year old all bundled up in his sweet tiny-ness sucking on a paci too big for his face. I love chuckling at quotes said by my mini-me when she was 3, and having to stop for a second to figure out if the pic I'm seeing is of Jack or Roger. It's uplifting to come across a post about how even tho it's been hard, God is good. And my favorite, seeing an old post from a friend that reminds me that I am loved.

After yesterday, though, I realized that in my attempt to stay positive on social media, I'm beginning to portray myself and my life as perfect, well kept, put together, admirable.

Oh boy, it's laughable just to type those things! That is not AT ALL my intention. There is airing laundry, and there is being real. I want to be real.

Because marriage, parenting, homeschooling, this thing called life is HARD. I know that I am not the only one who doesn't even sort of have it all together. The last thing I want to do is cause anyone to stumble - through jealousy or discontentment or hate - because I'm not being real.

This seems especially important right now as school has started up and parents are either facing homeschooling head on or wrestling in their spirit with the whole idea of homeschool. Let me give you some real when it comes to homeschooling around here.

I am going to prove to you that if I can do it, truly anyone can!

And we are only going to focus on yesterday...

I wasn't even all the way out of bed yet and I was already yelling at the kids. When breakfast was finally served, I locked the door to my bedroom so I could eat and vainly attempt some time with the Lord.

We managed a trip to the library which surprisingly is often a nice reprieve. Praise the Lord! But as soon as returning home, the chaos commenced. I hid in a book for as long as I could while letting the kids eat in front of the TV. Screens = sanity.

By the time I finally got up the strength to put the little two down for nap, it was pushing 2:00pm and we hadn't started school yet.

(School has been upstairs the last couple of weeks because I don't have the strength to deal with the mess...) 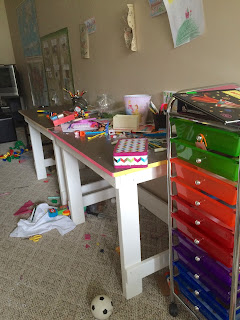 Jack took an HOUR to read his short story. Aren't homeschool parents supposed to be all patient or something? Not this one. I might've lost it on him... twice. It's a miracle we survived.

Meanwhile, Marie keeps thinking that getting out the iPad or turning on her music or doing anything that isn't school related is acceptable. I may have lost it on her.

At some point it's time to get dinner ready and we are still knee deep in school. I realize that the little boys have been playing in their room instead of napping for the last two hours.

I definitely lost it on them.

Derek calls. I'm pretty sure I motivated him not to rush home from work, although he'd never admit to that. He does return home, though, and saves the day.

It's somewhere between 6 and 7pm and we finally finish the last of school (which I posted on instagram - the happiest part of the day).

And the things I'm not telling you? ...
... I don't plan ahead. I figure out what we're doing next as the kids work on the previous thing.
... crafts stress me out so I avoid them at all costs.
... I do a little school with Kempton maybe twice a week and only manage to do that because he loves it.
... I let Roger color and essentially destroy Jack's math pages after he works forever on them.
... I'm convinced I'm ruining my kids at least once a day. 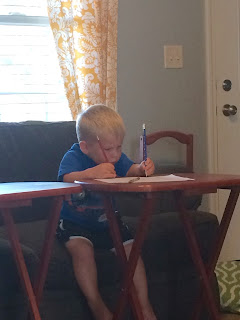 I am the mom who should not be homeschooling and yet I am because God called me to it and is miraculously bringing us all through it.

Most days do not involved quite as much pregnancy hormones as yesterday, but it's far from picturesque ever. We struggle. We survive. We hate it. But we mostly LOVE it.

I am sorry for portraying our homeschool life as beautiful when it is mostly a, well, mess. But I want to close out this laundry airing realness with the whole point in sharing it all:

Homeschooling (marriage, parenting, life in general) is HARD but oh so worth it. Even after snapping at a struggling reader, my heart (eventually) overflows with joy when I get to experience the light in their eyes when it finally clicks; the giggles still readily available after a long, hard, ugly day; the knowledge that even though their momma can throw tantrums just as well as they can, their day is still infused with Jesus. It has been the most fulfilling calling of my life.

I will continue to post sweet pictures of focused, hard-working, and giggly babies because let's be honest, that's what I want to remember. But if anyone ever tells you that they could never do the homeschooling thing, refer them to this post. And maybe when you're thinking about throwing in the towel, remember you're not alone and HIS mercies are new every morning!! 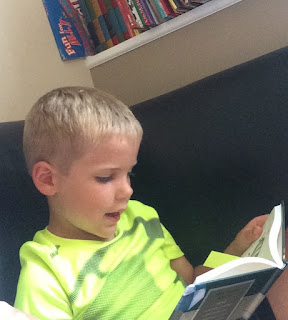 If I can do it, truly anyone can!