On facebook I'm a fan of Chalene Johnson, the creator of Turbo Jam and several other workouts. She's constantly posting status' about making and referring to your to-do list.

Back in Scranton I tried a to-do list countless times and always ended the day frustrated and disappointed in myself. I never seemed to be able to finish the list. Sometimes I wouldn't even get to anything on it! So I finally decided to-do lists were not for me and started ignoring Chalene's posts.

When we moved to Indiana life got, well, hectic. I am a very new mother of two, I suddenly have lots of family around, and we've jumped right into attending church as often as possible and spending time with Derek's students. It's a wonderful life! But a hectic one.

I kept forgetting things. The need for a daily to-do list was becoming imperative. I kept putting it off, trying to decide how best to go about this without ending each day feeling I failed. Finally I formulated a plan.

First, I pulled out a small sticky-note pad and told myself that my to-do list had to fit on a single sticky-note (4-5 things). This would combat the problem I had with making a to-do list 27 items long.

Second, I told myself to stick with broad to-do's. Instead of listing every separate room of the house and how it needed to be cleaned (1. dishes; 2. sweep kitchen floor; 3. swiffer kitchen floor; etc), I need to just write "clean kitchen." In fact, I've been going even more broad than that and on my list for today I simply wrote "clean." Since I don't need to clean to prepare for visitors, I can mark this off my list at the end of the day if I just did any cleaning at all!

Lastly, I gave myself permission to do things that are not on my to-do list. Like today, I did not have "blog" on my list. My previous attempts at to-do listing I would get frustrated because my list was so long that I felt I could only do what was on the list. Now that it's short, I don't feel guilty about doing non-list things. And also I've given myself permission to change what's on the list. You can't predict how a day is going to go. Sometimes priorities just have to change.

If you've been considering to-do lists or have been frustrated with to-do listing, I hope these ideas are helpful. Here's my list for today... 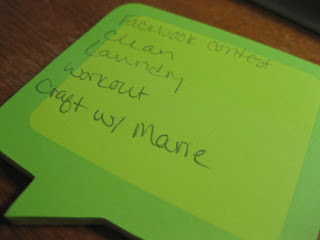 Now it's time to get to my to-do's!
Posted by Lindsay