There are lots of little interesting tidbits about New Hampshire (like the fact that they get 10x the amount of tourists as they have residents!) but I couldn't seem to get excited about a couple of big things. Well, I thought The Old Man on the Mountain was fascinating but Derek said the video I found was putting him to sleep. Maybe my brain just needs a spring break. Who knows. The bottom line is, New Hampshire is pretty but not super interesting! Nonetheless, we overall enjoyed studying it!

1. Be sure to practice the states and capitols and review states you've already studied!

2. Old Man on the Mountain: we looked at pictures online and in books from the library. We also read a book on one of the legends behind the big stone face appropriately called The Legend of the Old Man of the Mountain. I'll warn you, it was a sad story!
We also colored a picture of the Man (found it on google) and talked about how the cold New Hampshire winters finally did him in. 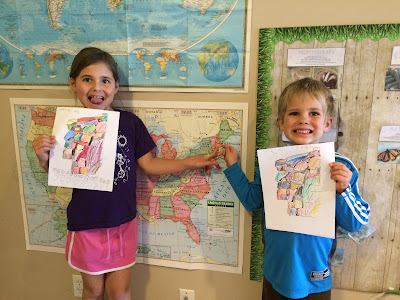 3. Mount Washington is known for having horrible weather at the top. Just another interesting tidbit.  There are also races held on this mountain called Mount Washington Hill Climbs. There are foot races and bike races and car races. There have been races held on this mountain since the early 1900s! Below is a video we watched of a race car taking a trial run. The kids only watched the actual run but older kids interested in how it all works would enjoy watching the whole thing I think.

4. You can't talk about New Hampshire without mentioning Robert Frost. I found a recommendation to read Papa is a Poet but it wasn't in our library. It sounds interesting though! So I'm passing along the recommendation. We got Stopping by Woods on a Snowy Evening from the library which is an illustrated version of one of Robert Frost's poems about New Hampshire.
We also discussed a little about poetry and wrote our own poems about our favorite seasons. 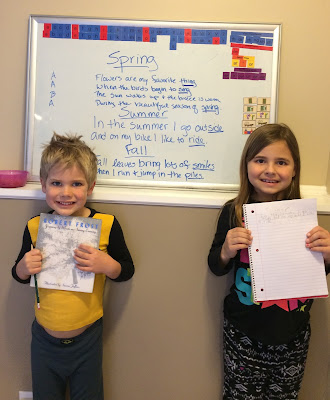 5. My favorite blog to check out when figuring out what to study for each state is EdSnapshots.com. They have a whole series that covers most of the states, and free scrapbook page printables. We decided to start using those pages to document where we would like to visit in each state so if we ever have the opportunity to go to that state, we can refer to our notebooks! Marie wrote about seeing where The Old Man on the Mountain once stood vigil. Jack wrote about visiting Tuckerman's Ravine on Mount Washington and watching Daddy snowboard down it. They then drew pictures of these places. 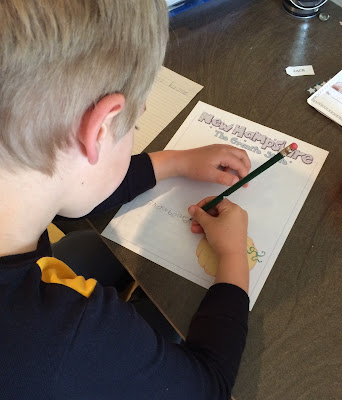 Thanks for joining our travels!
Next up- New Jersey!