Sometimes the words flow with little to no effort. Other times I have an annoying head cold and zero inspiration. But I managed to muddle through two completely unrelated scenes using the word prompt "Audience."

The first came from my staring out the window. The second has its roots somewhere in my work-in-progress novel. Enjoy! 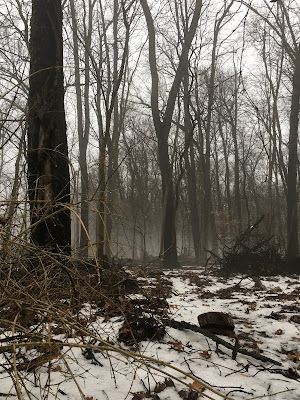 The snow was heavy and wet, melting into muddy sludge under each footfall. Fog rose from the ground surrounding the stark bare trees, giving the whole scene a thick eeriness.

She could see through the forest of trees and brambles, but felt blinded by the fuzzy endlessness. Everything looked exactly the same as a mile or two or seven ago.

The cold wet was seeping through her muddy shoes, sending chill to her bones. Where was she going? What was she doing? Why was she out here? She couldn't remember.

Losing her footing on the slushy snow, she grasped onto a prickly stem and cried out. Her voice reverberated off the soggy trees and died in the wet soil. Soaked through her clothes, she remained crumpled on the ground, weeping, oblivious to her audience waiting silently in the distance. 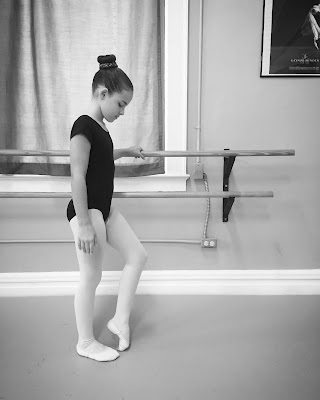 She pulls on her ballet slippers, the ribbon silky soft between her fingers. With deep breaths she attempts to calm her rapidly beating heart. Maybe this is the most important performance of her career, but it isn't a different dance. She's performed it a million times before, on stage, back stage, in her dreams.

Standing, she glimpses herself in the mirror and smooths out a flyaway. Ballerinas flutter about her, adjusting costumes, touching up makeup, talking and laughing. Everything is exactly as it should be. Exactly as it always is on performance night.

Her pulse slows and steadies. The regular backstage chaos is comforting. She closes her eyes, living the moves in her mind.

The sound of her name jolts her to reality, and she quickly moves into position. Just like every performance over the last three years, she sets her shoulders, lifts her chin, and shoves down the growing ache of knowing he won't be in the audience. Not tonight. Maybe not ever again.

She sweeps out onto the stage with her fellow dancers. The tap tap tapping of her pointe shoes is so familiar. The fluidity of her arms, her legs, her whole body comes from living this life every moment of her waking hours (and often the sleeping ones) for more than a decade.

But it's been in the last three years, the years he's been locked behind bars in a foreign land, that she became this. She is a ballerina. Her whole existence is wrapped up in this fact. And it shows through her pristine performance.

Sporadic cheers pop up from the audience on her sixth or seventh turn. Three, four, five more turns and she finishes with the air of effortlessness. The whole crowd erupts.

She knows he's not out there. She knows he's sitting cold and alone in a dank cell on the other side of the world. But she dances for him. Not for the stuffy important people in the box seating who came to see her. Not for the fans who will clamber for a picture with her after the performance. Not even for the God who gave her the gift but won't let him enjoy it. No. She dances for him alone.

The curtain falls on another ballet. Another perfect performance. Another day gone.