The word prompt was "fountain" and since I was struggling with coming up with something, I sought the help of my Bigs. The following stories were inspired by their creative minds: 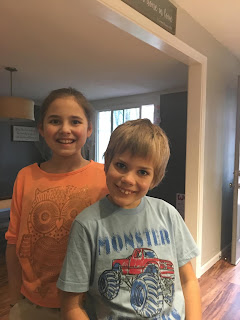 He kept drinking and drinking and wouldn't stop. He'd drink so much that he'd have to run to the bathroom and go pee. Then he'd book it right back to the fountain and drink some more.

I was thirsty. All I needed was a sip. But he was so fast about doing his business that before I could even finish my step forward, he'd be shoving me back so he could get some more.

Finally, I asked him what his deal was. His answer was simple: "It's just so good."

Then he transformed into a fish before my eyes. I took him home and kept him as a pet.

After I got a drink, of course.

The most beautiful fountain any eyes have ever beheld was handcrafted by God Himself. Adam and Eve and all the animals of the Garden would gather around it every morning at dawn and worship the God who created them.

The water was crystal clear. It even sparkled in the morning sun. When Eve held her hand under the flow that cascaded down three full tiers, the water was so soft and so perfectly temperatured that it was like she was running her hand along the lion's mane (which she often did).

Yahweh would meet them there and they'd sing and chat and laugh together before heading out for their morning walk.

In the evenings, the moon would light up the fountain, giving it a fantastic glow like no earthly light could give it. Adam, Eve, and Yahweh would sit along the rock edge and recap the day, taking sips from the delectable water. Various animals would join them, lapping up some water then nuxxling or curling up in Yahweh's lap.

It was all perfect. Until it wasn't.

The evening after Eve gave in to the serpent's temptation, she and Adam didn't join Yahweh at the fountain. From a nearby thicket, they watched Yahweh greet each of his animal creations. His face was downcast as he snuggled a koala bear in his arms. Did He know somehow? It scared the couple while breaking their hearts. They ached to join Him at the fountain but they no longer belonged.

When they were cast out of the beautiful garden, just before the angel guards held up their flaming swords, Adam and Eve saw Yahweh running his hand under the fountain water, tears flowing freely. He looked at them and in that moment the fountain dried up and the garden vanished from view, waiting silently for the Savior to return.